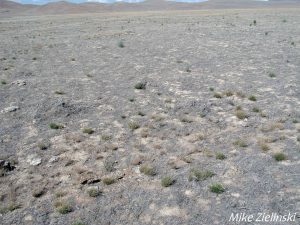 Rangeland managers and researchers were mystified in 2003 by miles-wide holes in the blanket of cheatgrass (Bromus tectorum) that usually covers large swaths of the Intermountain West.

Cheatgrass is an exotic Eurasian annual grass that sneaks in around our native perennial grasses and shrubs. When cheatgrass dries, its narrow leaves and stems are perfect fuel for fire. 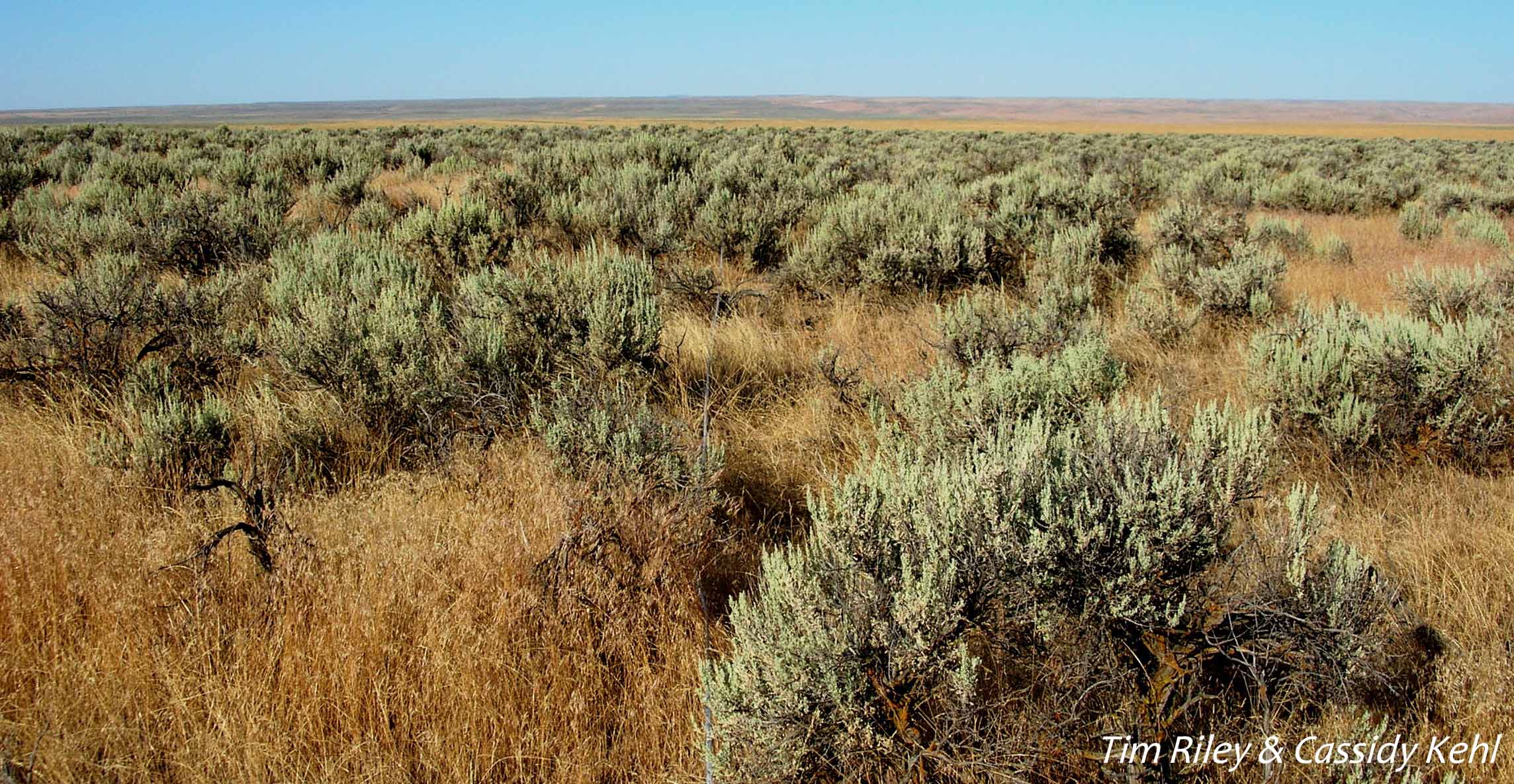 Our native shrubs are damaged or killed by fire. Native grasses weakened by previous fire, growing-season grazing, or drought also succumb to fire. Cheatgrass dies each year, after producing a bumper crop of seeds. These seeds move into burned areas while the native plants are still recovering. Cheatgrass germinates quickly, grows, and produces more fuel. 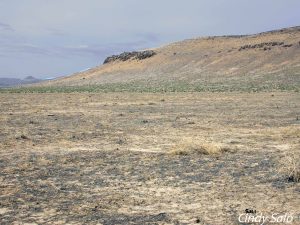 When I visited Winnemucca in June 2003, I found former cheatgrass stands looking more like parking lots than rangelands. The annual grasses and mustards were gone, but the perennial grasses and forbs (wildflowers) were thriving. After walking around and scratching my head for a couple days, I stopped at a nearby ranch and asked what they knew about the missing cheatgrass.

The corral I pulled up to belonged to Jim Christison’s mother. She sent me up the road to talk to her son. Jim told me he’d seen “millions” of larvae “eating every green shoot” one January night. He took photos, collected larvae, and got them identified. Jim had found army cutworms (Euxoa axiliaris). 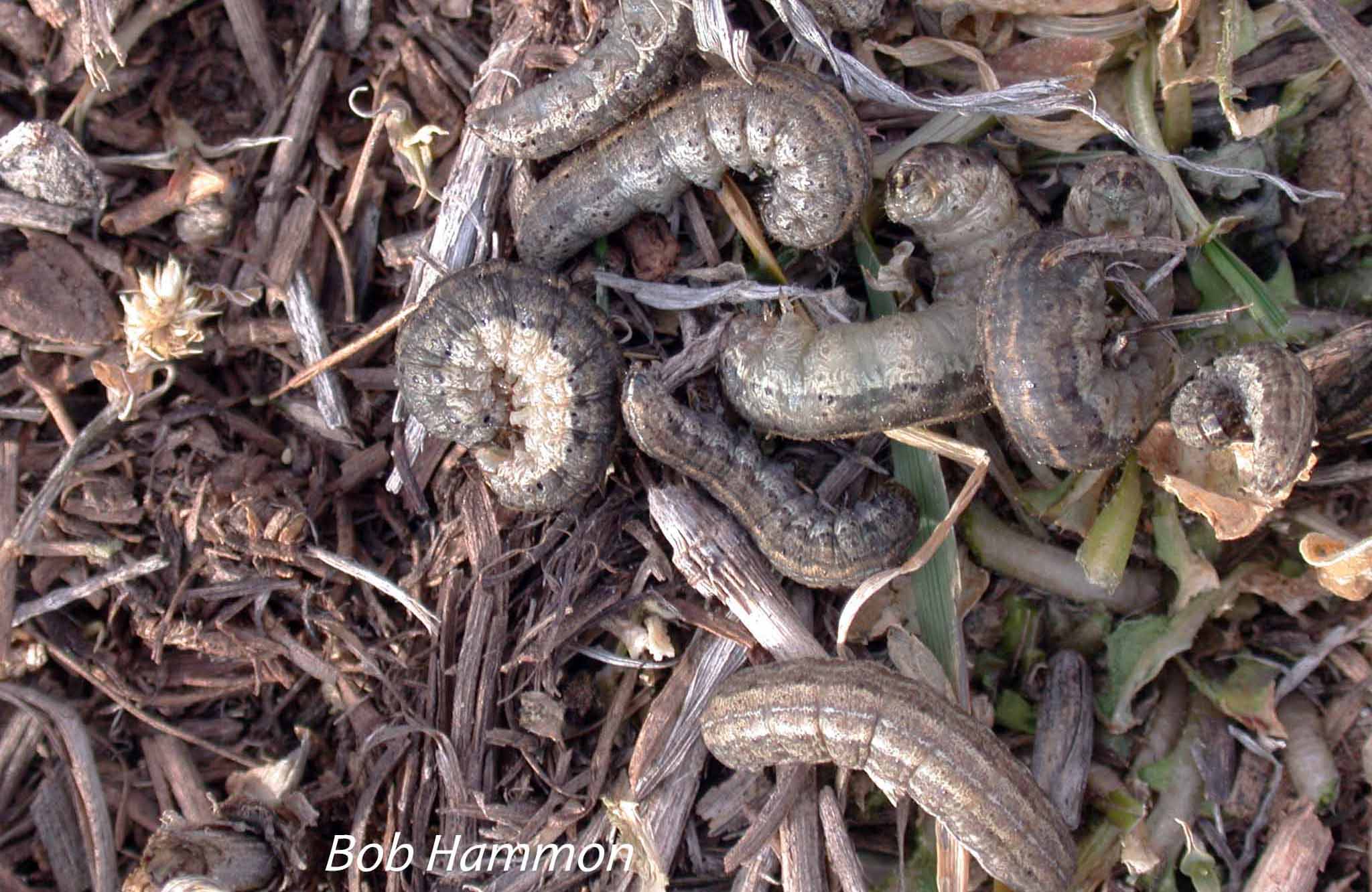 Army cutworms are native larvae that eat introduced crops—wheat and canola—and exotic weeds—cheatgrass and mustards. The larvae grow into miller moths, which eat nectar. Moths from the Great Plains fly to the Northern Rockies for the summer, where they’re an important food for grizzly bears. We know less about where moths from the Intermountain West go in summer.

The first entomologists I asked about Jim’s story had never seen army cutworms eat cheatgrass. They said the larvae couldn’t consume enough seedlings to create such large bare areas. One by one, the insect experts I asked said army cutworms weren’t the culprit. 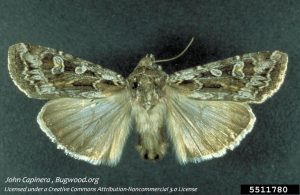 That September, I ran into Bob Hammon, with Colorado State University Extension in Grand Junction, Colorado. Bob had seen more millers than usual the previous fall. The moths found lots of bare ground for egg laying, due to a recent drought. The drought had been broken by a late summer rain that germinated winter annual plants for the larvae to eat. Then the dry winter of 2002—2003 kept larval diseases low.

I shared what I’d learned about army cutworms and cheatgrass die-offs at the Society for Range Management’s annual meeting in early 2004. I thought my work was done.

But rangeland managers had never seen army cutworms eat cheatgrass. They were as skeptical as the first entomologists had been. I realized I’d have to wait for the same set of conditions to reoccur and see if we had another outbreak. Then I’d watch what the larvae ate.

While I waited, I wrote about The Cheatgrass that Wasn’t There in my column in Rangelands magazine, a publication of the Society for Range Management. 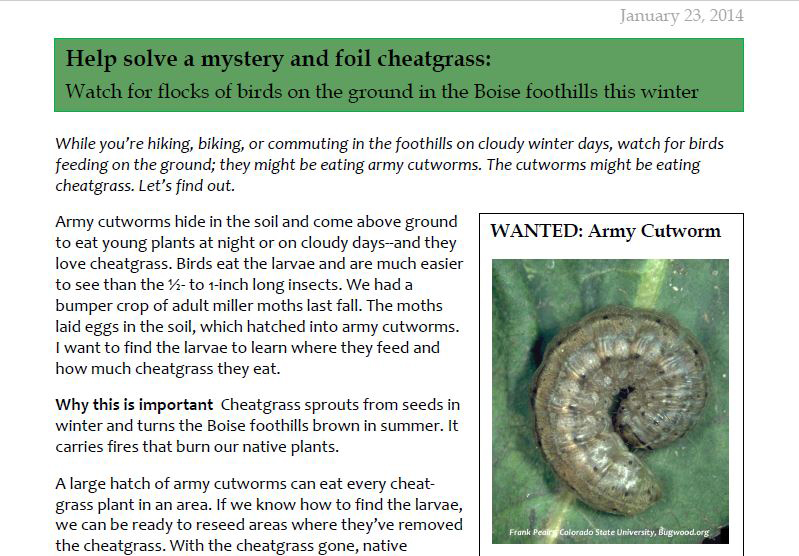 In January 2014, I recognized in southwest Idaho the conditions Bob Hammon saw in western Colorado in 2003: a dry year, a huge late summer rain, lots of miller moths, and then a dry winter. I emailed “Wanted” posters to friends, asking for help finding the larvae.

Owyhee County, Idaho residents contacted me in February with reports of larvae. The first sightings were the leading edge of a major army cutworm outbreak. Sixty-year residents of the area had never even heard of a previous outbreak. 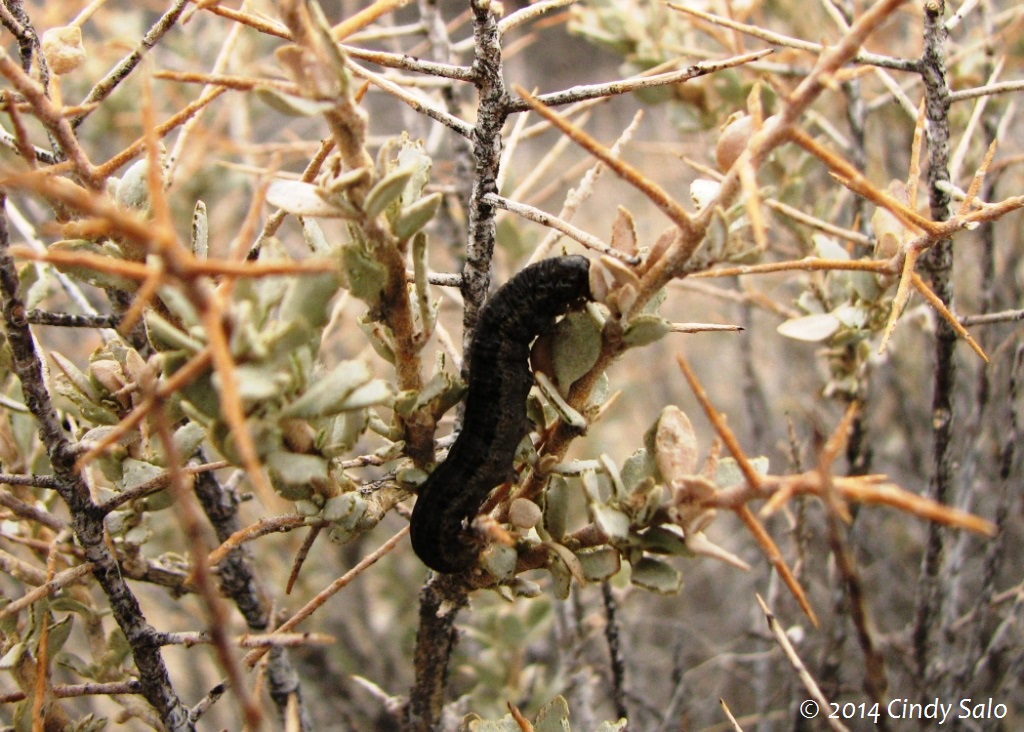 I told managers and other researchers what I learned at the 2017 Society for Range Management annual meeting. My research paper in Rangelands describes the 2014 army cutworm outbreak, cheatgrass die-offs, shrub defoliation, and subsequent vegetation recovery. I was sure my work was done.